The Epidemic of Narcotic Overuse in Hand and Upper Extremity Patients

The Epidemic of Narcotic Overuse in Hand and Upper Extremity Patients
Posted on: 24 August, 2018 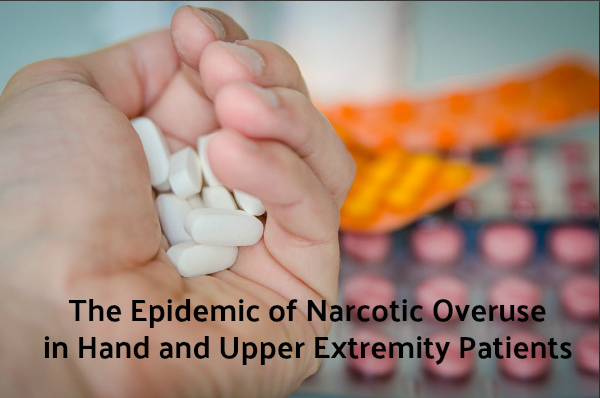 Over the past 20 years there has been an explosive increase in the prescribing and consumption of opioid medications in the US. It is now estimated that Americans despite being only 5% of the world’s population consume 80% of the opioid narcotics produced world-wide.  As a consequence, the death rate from the misuse of these drugs has more than doubled since 1999. It is estimated that in any given month 5.1 million Americans used narcotics for non-medical reasons and $42 billion in lost economic productivity nation-wide is linked to its adverse effects.

In large part the medical profession is to blame for this problem. During the 1990’s physicians were encouraged to prescribe large amounts of opioid medication to their patients to control their pain especially in the surgical arena, the thought being that adverse outcomes to care could be traced to the under prescribing of pain medicine. It was also felt at the time that this class of drug was both safe and effective, downplaying its side effects and addictive potential.  Amazingly, as late as 2004 national hospital accreditation organizations and state medical boards penalized doctors and hospitals for under prescribing pain medicines. Doctors became intimidated into over-prescribing opioid narcotics to their patients for fear of patient retribution or litigation as well as filing  formal complaints with state ethics boards for lack of adequate pain control.  To make matters worse until very recently state and national medical boards have published no concrete evidence base guidelines for the prescription of analgesics to control post-operative pain.

Recently it has been shown that in patients with chronic pain long term use of these drugs actually prolongs the period of pain and increases its intensity and concomitant psychological distress. Over the past 5 years studies have emerged that have monitored physician narcotic -prescribing habits in the post-operative setting and the patterns of consumption of these drugs.  It has emerged that for any given surgical procedure doctors prescribed 2 to 5 times more pain pills than was actually used by the patients to control their pain. For example, in upper extremity bone procedures an average of 14 pills were used post op whereas in soft tissue surgery 9 pills were used all over a span of 2-3 days post op. Average prescriptions were written for between 25 and 30 pills. Thus, nation-wide in any given year millions of opioid pills remain unused for their primary purpose and either are left in the medicine cabinet to age or become misused by the patient or someone close to them who may have access to them.  Because the medical profession has either been unwilling and unable to police themselves, states and the Federal government has stepped in to institute guidelines and close electronic monitoring of physician prescribing behavior with real penalties for deviation from those guidelines.

As a surgeon, I’m faced on a daily basis with the quandary of trying to balance

compassionate pain control in pre-op and postop patients with a keen sense of the new reality in which we must practice. New concepts of controlling post op pain include multimodal pain control, that is attacking the pain from many angles. These may include regional arm blocks with or without longer term indwelling catheters, long lasting local anesthetics such as Exparil, controlled “cold” therapy and the use of adjunctive non-opioid medications that may augment the pain-relieving effect of the opioid without increasing its “narcotic” effect. These may include the judicious use of anti-inflammatories such as ibuprofen or acetaminophen, gabapentin or antidepressants. Tramadol was initially marketed as a powerful non-addictive analgesic that would “replace” the morphine based drugs such as hydrocodone or oxycodone. However, Tramadol has been shown to be equally as addictive as the others.

While all agree that this national epidemic is something that must be met aggressively and head on there is still little agreement and hard science as how to proceed from where we are.  This will take several years to iron out but in the interim patient should expect to receive far less pain medicine from their doctors and not expect to get refills of their pain medication as these rules go into effect.